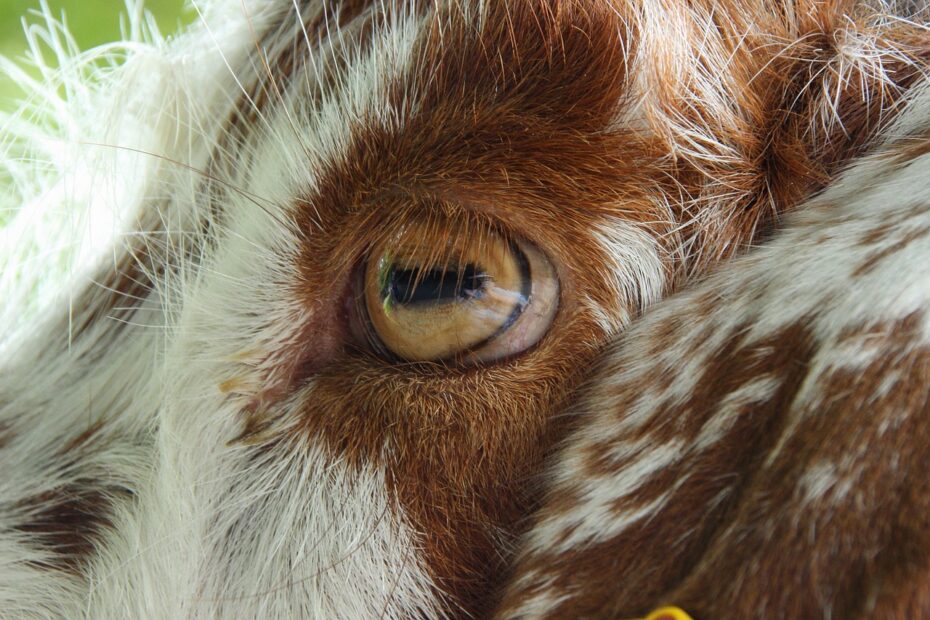 Eye’ve got something to tell you about… Goat eyes! Whether it is about how weird they may be, or how to breed for a favorite color of the eye, or how to keep them safe, I have honestly heard goat eyes come up in conversation way more than any other ocular orbit. So, whether you are a breeder, or someone who just can’t get the image of rectangular pupils out of your head, or someone who can’t get enough of obscure facts to share with your friends, here are a few things you might enjoy!

1. Why Do Goats Have Rectangular Pupils?

One of the first things I heard people say when talking about goats is how they have weird eyes. True, the goats we have in our pastures are domesticated, but this goes back quite a bit, to the evolution of predators and prey in the wild. As prey animals on the bottom of the food chain, goats needed to be able to see predators sneaking up on them from any angle to be able to survive. Not only this, but goats needed to be able to still see with their heads either down towards the ground grazing, or stretched up towards the sky browsing on branches.

Pupil shapes have a significant impact on what and how an animal can see. The wide pupil shape of goats allows goats to see a broader field of vision around them, still, be able to regulate the amount of light that gets inside them, and also helps allow light from multiple angles to get in so even when grazing they still can see what is going on at the horizon, such as approaching predators. Can you see things in front of you with your nose either touching the ground or pointing towards the ceiling? If not then you don’t have rectangular pupils.

2. Do any other Animals have Rectangular Eyes like Goats?

Goats did not being prey animals, so it comes to reason that they did not invent rectangular pupils either. Many animals, especially grazing animals who need the ability to see in both day and night but see a wide field of vision have them. These animals include:

These vulnerable species have rectangular pupil forms to survey their environment very accurately.

In addition to being able to see on a wide scope, the rectangular shape of the goats’ pupils can expand and contract just like the vertical slits but on their side. A good way to test something on whether or not an animal has night vision is to see if they have eyeshine. Shine a flashlight in their general direction so some light shines indirectly towards their eyes in the dark. The stronger the animal’s night vision reflectors, the brighter its eyes will shine. True enough, goats’ eyes shine a marvelous green! Therefore you do not need to worry about whether goats need light to navigate in the dark.

Ok, so now that we have concluded that goats can see even in the dark, can they really see everything? Like can they see colors?

Colors are seen when the light goes through the pupil and hits the rent at the back of the eye made up of rods and cones. Rods are important for image quality at night. How many cones and which kinds of cones an eye has enables an animal to see various colors. Because of this rod/ cone dichotomy, there is a usually seen inverse between being able to see well in the dark and being able to see colors well, so since we have already determined they can see in the dark, does that mean they can’t see colors?

Wrong! Although goats cannot see colors as well as we can, and are red/ green colorblind, meaning they cannot distinguish red apart, they can see colors a lot better than many animals who are known for having night vision. Another win for the power of goat eyes!

Scientists have done several tests to determine goats’ ability to distinguish colors. Although goats were able to distinguish between colors and grey shades well, not all colors are seen equally. Surprisingly, the color that goats can see the best is not green, but actually orange. Green/red is the second-best color, however. After that, goats can distinguish between yellow, people, and blue in depending order with blue being the color they are the worst at seeing.

5. How Large is a Goat’s Field of Vision?

Ok, so the rectangular pupils are known for helping create a broad field of vision… But how broad are we talking about here? There are many diagrams showing the field of vision of horses, which have less perfectly rectangular pupils. These show a range of vision of 350 degrees but has a blind triangle in front of their face, which I imagine could be awkward for eating. Goats, interestingly enough, only have 320-340 degrees of vision, but they have no blind spots in front of them. Hooray for seeing what you’re eating!

Goat’s eyes are designed to see the horizon despite what they are doing as long as nothing else disrupts their vision… Good luck sneaking up on a goat!

7. How Far can Goat Eyes Move?

Once again, goat eyes are designed to be able to see as much as possible from any position. The human eye can pivot by 5 degrees to be able to see different angles without moving our heads. Now if you thought we had it good, goats’ eyes have the remarkable ability to rotate by 50 degrees! I have a hard time even imagining what that is like.

Now it might surprise you, but when goat eyes are not being considered weird, they are often seen as beautiful, and the worth of a goat can be considerably increased or lowered depending on what color of eyes they may have. Goats can have amber, brown, blue, or dual-colored eyes, but brown and blue are what you find most of the time and are most understood.

Aside from breeds of goats where blue eyes are not allowed, they are extremely sought after, and the eye’s color can increase the worth of a goat quite a bit. An interesting thing about goats is they are often reversed from humans on what is dominant and recessive traits, and eye color follows the same pattern, making blue eyes dominant.

This makes it easier to breed for the much-coveted blue eyes, because goats with blue-eyed genetics will have blue eyes, unlike a recessive trait where an animal can be silently carrying it without any visual manifestation of it. This does mean that two blue-eyed goats still can have brown-eyed kids, however, if both parents only have one copy of blue. Two brown eyes goats cannot have blue-eyed kids.

9. What Diseases Can Affect Goat Eyes?

As amazing goat eyes are, they are unfortunately not infallible. The most notorious of these is pinkeye. This is a very dangerous microplasmal disease that can rampantly spread across your entire flock of goats, sheep… and even you. When untreated this can make the goat blind, even permanently if it gets far enough. Even worse, once the eye is destroyed, pinkeye can go into the bloodstream of the animal, causing septicemia, abortion, respiratory problems, and arthritis. As amazing goat eyes are, pinkeye is certainly nothing to laugh at.

The first thing you need to do is quarantine affected goats away from your flock in a dark place to prevent further infection of healthy goats, or increased eye injury to the diseased ones. Wear gloves when handling these goats and avoid touching your face to prevent yourself from getting it as well. After that antibiotics are usually the best way to treat the infection. Depending on what product you have and the directions this may be through injection, eye drops, or a cream administered on various schedules depending on the product used. Wall-a! Your goat eyes should recover to see another day!