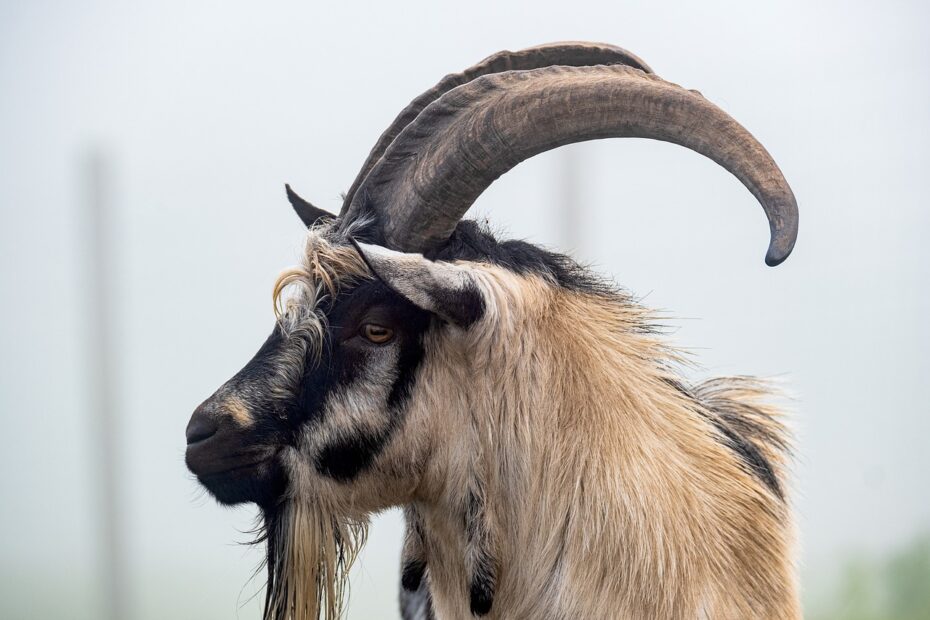 Goats are mammals you’ve probably encountered more times than you can count. You can study so many features and attributes about these incredible mammals, but our focus will be one prominent feature – their horns. A goat and its horn are like a package deal; goat horns come with the goat.

It’s no news that goat owners remove these horns, and some prefer naturally hornless goats, otherwise known as polled goats. One major reason why people prefer hornless goats is that, as much as horns have their uses, they can be a problem if they aren’t well handled. This could be why you don’t see so many goats around with horns.

However, it is only fair that we understand this feature that makes these animals the proud creature that they are. So let’s go!

What are Goat Horns Made Of?

A goat horn, just like other horns, is made of a protein called keratin. This protein is the same material found in claws, hair, fingernails, and hooves. Generally, the horn is an outer layer of the body part with a core of live bone. The horn is attached to this core of live bone.

A horn is usually curved or spiral. It is important to note that although only males have horns in many species, female goats have smaller horns. A goat’s horn consists of blood vessels, hair, and nerves, so it is as alive and sensitive as other parts of the body.

Every baby goat is born with horn buds, except naturally polled goats, so horns begin to grow soon after they’re born, and this growth continues throughout the goat’s lifetime – except if they are dehorned.

Sometimes, after disbudding, some goat’s horns grow back, and these horns are known as partial horns or scurs. Horns can regrow in male goats (bucks) if the disbudding process wasn’t done well or the buck wasn’t disbudded early enough.

Scurs aren’t typically problematic, but they can cause concern for goat owners, and some find ways to get rid of them. To avoid having to deal with scurs, it would be advisable to disbud the goat thoroughly.

Do all Goats Have Horns?

Naturally, all goats should have horns, and this includes the female goats (does). Does generally have smaller horns than their male counterparts, but they have horns all the same.

Also, if a goat doesn’t have horns that don’t mean it never did. As mentioned earlier, some owners have dehorned their goats. This is why it may be impossible to determine a goat’s gender using the horn as a criterion.

In some cases, some goats are born polled, meaning they will never grow horns. This is usually due to a recessive gene that makes it impossible for these goats to develop horns as they grow.

According to the North Dakota State University of Agriculture and Extension, hornless goats are known as “butt heads.” You might want to think of that the next time you come across a goat without horns.

Different Goat Breeds and their Horns

Just as different features vary in different animals based on their breed, goat horns appear different among various breeds. There are many goat breeds, but here are examples of some breeds that will explain in detail how different horn shapes can be:

Nubian goats are popular dairy goats, but their usefulness doesn’t end with their ability to produce milk. These goats are also popular for their meat and hide as well. Their horns are slightly curved and are positioned beside their long, floppy ears.

Just as you shouldn’t judge a book by its cover, you shouldn’t judge a pygmy by its size. These little creatures have so much energy packed in their small, compact size! Add their horns into the mix, and they become a force to be reckoned with. These horns are generally straight but could curve outward away from the head.

Girgentana goats are beautiful dairy goats. They are medium-sized animals with a white coat and grey-brown colored hair around the throat and head. Besides their milk, these goats are best known for their unique horns, which are generally twisted in a spiral form, like a corkscrew. This breed is mainly found in Italy.

When you see a Boer goat, you see meat. This shouldn’t come as a surprise, as Boers are robust and stocky. Their stocky build also reflects in their thick horns, usually curved backward. However, not all Boers have their horns appearing this way. Some Boer’s horns are shorter and appear straighter and narrower, almost like a pygmy’s.

Although most owners would prefer to have their goat’s horns removed, it is no doubt that these horns have their usefulness and significance. Here’s why goats have horns.

Goat horns help regulate their body temperature in hot weather. According to scientists, goats grow horns due to “the extensive network of blood vessels,” which help keep these animals cool in hot seasons.

Here’s how it works: As blood pumps through the horn’s core, there’s heat exchange. The blood passes close to the outside of the horn, and heat is lost to the atmosphere, while cooler blood returns to the animal’s body. This helps cool the goat’s temperature.

We’ve already established that both bucks and does grow horns, but male horns are usually stronger and thicker than the female. This is because horns are generally a physically attractive trait that attracts females.

The thicker or bigger the horns look, the more the buck attracts more females because stronger horns give off a sense of male sexual vigor, strength, health, and the ability to fight and protect her and her kid(s).

Some would argue that this is a fundamental reason for horn growth. Goats tend to butt heads to establish dominance and superiority, which is a major factor in a goat’s reproductive success. This is a tendency across all species, including humans. Men sometimes compete against one another to get the girl, although (usually) no head butting is involved.

A goat who wins is usually seen as the strongest, one thing that does are especially attracted to. However, humans have now taken over breeding and mating goats; they (the goats) don’t have to worry about competing to get the best does to mate with.

For Protection Against Predators

Goats also use their horns for protection, which comes in handy, especially for goats that live in the wild. Goat horns are strong and are used for ramming and butting. Since goats are herbivores, they are easy prey to carnivores, so their horns serve as a means of survival.

Humans also make use of goat horns, and this could be another reason for dehorning horned goats. In fact, humans have found more uses for these horns than even the goats, and some of these uses are:

These and many more are some of the uses of goat horns to man.

To Dehorn or Not to Dehorn?

In recent times, dehorning and disbudding have become common among livestock owners, majorly because a dehorned goat is easier to manage, control and care for than a horned goat. Also, this subject is a hot and controversial topic in the world of livestock farming. So, why don’t we jump on the bandwagon and evaluate the dehorning topic?

Dehorning and disbudding are routines but painful practices in livestock rearing. It is prevalent among dairy goat keepers. Although both terms mean the removal of a goat horn, the processes are pretty different.

These two practices are sensitive issues to discuss, as different people have had so many things to say about them. Although there are justifiable reasons for dehorning animals, some believe it should be shunned.

Some of the reasons why people would rather dehorn a goat than leave the horns intact are:

Dehorning is simply the removal of livestock horns, and in this case, goats. Dehorning takes place when the goat horns are removed after the horns have grown. Dehorning is more dangerous than disbudding because, at this stage, you aren’t dealing with horn buds anymore but fully matured horns.

You can employ several techniques to dehorn your goat, but it all involves cutting off the horns. As this is usually a painful experience for the goat and its owner, you should employ the services of your veterinarian. A vet has the experience to carry out the procedure correctly and will ensure that your goat experiences less pain during the process.

Disbudding, on the other hand, is when goat horns are removed in kids. A kid is born with horn buds on their heads. The disbudding process involves burning off the horns with an iron, eliminating any chance for the horn to grow.

The procedure is usually done when the kid is 4 to 10 days old, depending on how fast the buds begin to erupt. After the process, what usually remains is a bump where the horns would have grown.

Dehorning and Disbudding: Pros and Cons

Treatment of Damaged or Broken Horns

A damaged or broken horn can be very painful. There can be a lot of bleeding, depending on the extent of the injury. Even if the injury is not life-threatening, the goat will still bleed to an extent. Here are some quick tips for handling horn injuries:

Goats are majestic animals, and their horns make them look even more magnificent. Before you remove their horns, think about why you want to have those horns removed.