Goat udders – Everything You Need To Know 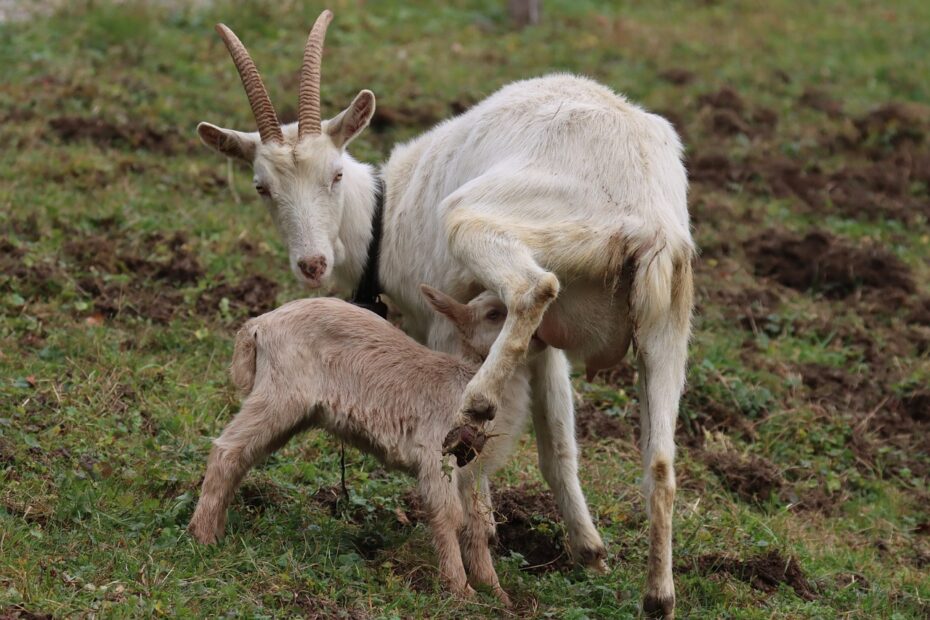 The udder, or mammary system is a very valuable part of any doe. Even if she isn’t a dairy doe, or being kept for milk it is crucial for raising the doe’s kids, and the health and overall function of the goat’s udder is significant in how productive a doe can be and for how long she will be able to keep producing into her life.

The udder of a goat is made up of two mammary glands, separated by a ligament to create two halves of the udder. Ideally there will be one teat on each halve, each ending in an orifice to allow the milk exit.

In some cases a doe may have a defect called supernumerary teats where she has extra teats and/ or orifices on her udder, which can cause issues with machine milking or leave her more prone to mastitis (more on that later). This is widely seen as a defect or disqualification, however, and you should try to ensure your doe has the correct number of teats free of side branches with an orifice at the end of each one.

Even though important in all goats, the quality of the udder is most sought after, and most impactful to the doe in dairy goats, who are raised specifically for milking and can produce over a gallon a milking in top does. The doe should have a high udder close to the body (not pendulous) with wide udder attachments in both the front and back of the udder. These attachments help keep the udder in shape and prevents it from becoming loose where it put more wear and tear on the animal and makes it more likely for the udder to be damaged while the goat wanders its enclosure and interacts with other goats.

The overall look of the udder when shaved should be spacious but smooth when full, seamlessly running into the body with a prominent, but not jarring separation between the two halves of the mammary glands at the suspension ligament.

The only things that should stand out from the overall smooth appearance are the two teats, which should be medium sized, to be able to comfortably fit in the cups of a machine milker, or in your hand if you intend to milk by hand.

The teats should be uniform in size and placement, being squarely in the center of their half of the udder, and pointed either straight down or slightly forward. This will help with ease of milking as well as ward off damage to your doe’s udder.

But what if my goat’s udder is being abnormal?

With the udder being such an important aspect to your doe’s potential productivity and health, you will want to keep a careful eye on if it is doing anything strange, as that will give you important insight into those aspects of your doe’s life. The biggest things you should be looking for with your doe’s udder is unusual changes in size and shape, being abnormally hot, hard, or a change in color for either your doe’s udder or milk.

The behavior of the udder will change due to your goat’s circumstances and her stage in life.

A doe will work on filling up her udder with colostrum, the important first milk for her babies within the last month of her pregnancy. This is often used as a sign to confirm pregnancy and to help determine how soon the doe will be likely to kid. This is not an exact science to determine timing, but it is natural and often happens in the last few weeks of pregnancy.

Some does start filling up a month before kidding, and in some cases a doe won’t fill up till the day she gives birth. It is more likely that your doe will not fill up till later if she is a first freshener, or first time being in milk, as her udder did not develop in the past and so it takes a little longer for it to start growing.

If your doe already is milking, however, it is important to dry her up 3 months before she kids to prevent you from missing these signs of her pregnancy and to not prevent her from producing colostrum, which is important for kickstarting her kids immune systems.

Sometimes you may notice that one side of a goat udder may be bigger than the other. This is a concern as this this imbalance could be an indication of infection. Even if it isn’t, it could cause injury to your goat as well as cause permanent distortion to her udder that can lead to increased susceptibility to such injuries, disqualification in the show ring, and overall lower the value of your doe.

First check to see if the fuller side feels hard or inflamed at all. If so look into treating for mastitis. If the full side feels like it is simply full of more liquid than the other, milk the fuller side to try to even it out. This often indicates that your doe is being stimulated to produce milk unevenly on the two sides, often due to kids nursing more on one side than the other.

To address this the the kids may need to be penned away from the doe and have the smaller side milked out more completely till it is producing comparable to the other if simply milking the the large side to prevent it from becoming too imbalanced while milking the smaller half more thoroughly to encourage increased milk production doesn’t even it out.

This is when goats create milk faster than the rate at which it is being milked and it becomes engorged with milk. A goat not nursing kids and at full milk production should be milked every 12 hours to prevent this. With care to prevent stimulation for peak milk production in a doe’s first week of freshening and encouragement to milk less a goat can go longer between milkings without becoming congested or engorged, but this cannot be done suddenly and will cause the goat to milk less for the rest of the milking season.

Becoming congested will cause a doe to produce less as well, so if you don’t want her to drop in production you want to be careful to prevent it from happening. Fortunately if she does become congested all you have to do is milk her and as long as her udder doesn’t become too hard or hot and the milk inside still looks normal your goat should stay in good health as long as you continue to milk on time in the future.

The horror of mastitis

Now this is something none of us wants to hear, but is probably all the more important for us to learn about for the sake of our animals. Mastitis is an infection of the mammary glands that can impact the health of your herd and even other animals on your farm if not given proper veterinary treatment.

The first signs of mastitis are hard udders under pressure with tight, hot skin. This is often followed with curdled or bloody milk, and if left untreated can lead to a discolored, gangrenous udder. This is one of the more infamous problems that can develop in a goat udder, and it is important to take measures to prevent and address it.

This infection can be caused by stress, injury or the introduction of bacteria into the udder, so maintaining the overall health of your animal and using healthy handling practices are important. Shave and wash your animals udders prior to milking and keeping your area clean. Also avoid dipping the teats in anything or leaving them wet afterwards as this can encourage bacterial buildup.

Also try to remove any obstacles in the enclosure that could break the skin, as injuries to the the teats or udders could allow mastitis to develop. Try to avoid your goat getting too congested or allowing kids to head-but your goat too aggressively as this is a common cause of mastitis as well.

It is often said that goats with large teats, or with extra teats are more likely to develop mastitis. So that is another reason why looking for a standard goat udder with a medium sized teat is considered the best fit for the farm.

If you do get an animal with mastitis, quarantine the doe from any nursing kids and contact your local vet immediately. Several antibiotics are used, but none of them are specifically labeled for use in mastitis in goats, so veterinary consultation is advised. There are some commonalities that usually occur, however. Antibiotics are injected into the animal either via needle injection, or you feed the nossle of a sirenge up the teat and add the treatment directly into the infected area. Milk as directed by your vet.

Make sure to hand milk all sick animals last and sanitize all milking equipment thoroughly, and do not save any of the milk to prevent bacteria from transferring bacteria from between milking animals. Mastitis can also be transmitted to non milking animals through the milk. This is why it is important to make sure that nothing drinks the milk, including kids, and is why related animals to a goat with past mastitis are under suspicion for developing mastitis themselves. But since it is due to viral/ bacterial transmission through the milk, animals not related who could have contaminated milk could risk getting it.

This is why infected goats are usually quarantined to a small pen till about a day or so after negative test results get back. Some people may even sell the animal to remove the risk on increased problems from their farm, so check new animals for signs of mastitis before buying them. It turns out that good udder health in your herd is no small matter.